The past 12 months has seen hugely significant progress for Chester Visual Arts.

Becoming a registered charity and gaining the support of Arts Council England has greatly enhanced our aim of establishing a permanent, public visual arts centre and exhibition space in Chester.

Over 10,000 people visited our two V&A touring exhibitions The Woman’s Hour Craft Prize and Chance and Control: Art in the Age of Computers. Alongside these exhibitions we held numerous talks, artist-led workshops and performances.

We have made significant strides in developing our educational programme as one of our core activities. New relationships have been established with secondary schools, colleges and universities across the North West. Our Learning Programme Manager has instigated and delivered Travelling Presentations to schools and a new Instagram educational resource. We hosted several tours and workshops with students of all ages.

To raise awareness about CVA’s ambitions, in July, Lord Cholmondeley hosted a private reception at Cholmondeley Castle for over 100 regional, national and international cultural and business leaders.

After vacating the Old Library building in late September, we have been working hard behind the scenes on our plans for 2020 and beyond. Several exciting projects are in the pipeline, so we now need to raise the funds necessary to implement these plans and establish a professional structure that would enable CVA to realise its rich potential as an arts organisation with dedicated staffing and capacity.

As 2019 draws to a close and we move towards an exciting 2020, we would like to express our appreciation to our funders, partners, artists, visitors, staff, volunteers and everyone who has supported CVA this year.

Wishing you all a Merry Christmas and a Happy New Year. 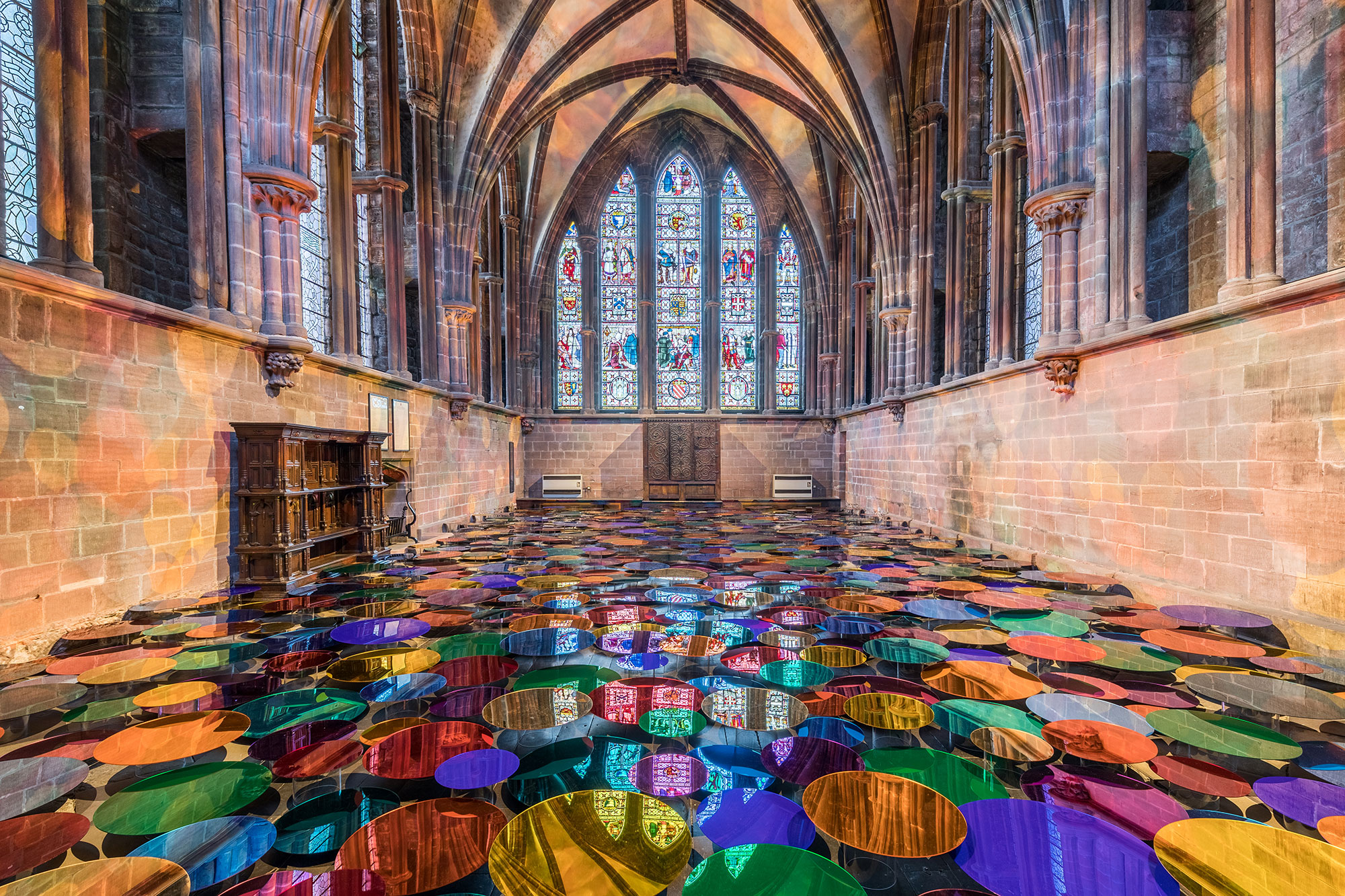 For several years there was a piece of graffiti on a canal bridge about a mile north of Chester. It read: “Colours keep me alive.” I frequently passed it on walks into the city, and was always cheered by that existential cry from an anonymous heart.

One day, officialdom vandalised the site with a bucket of whitewash. But I have always liked to think of the author of that graffiti somehow managing to keep the faith. I also like to think that she or he has by now seen Liz West’s installation Our Colour Reflection currently on show in Chester Cathedral. They would realise that they had not cried in vain. 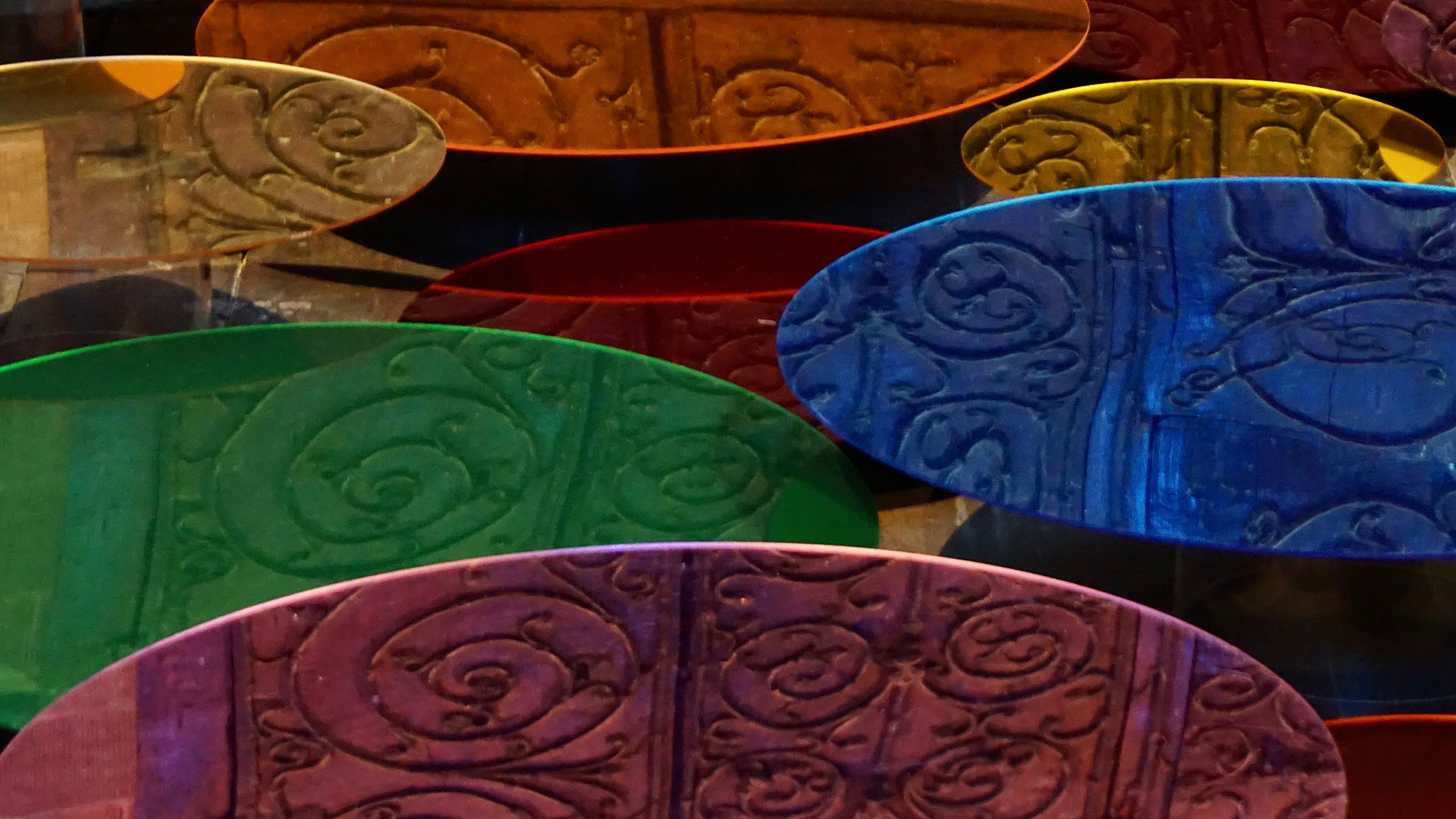 Liz’s piece occupies the elegant Chapter House (built about 1250-60) with its rib-vaulted ceiling and its five soaring lancet windows on the east wall. She has carpeted the entire floor in hundreds of coloured disks. They bring their own distinctive colours and tones, but also mirror and reflect their 13th Century surroundings.

The mediaeval building and the 21st Century artwork pay sincere tribute to one another and now cohabit harmoniously. They seem to call out to one another across eight centuries. Each brings its own art and craft, and then they join to co-create a fresh work of stunning originality.

Churches and cathedrals might have been built to honour god, but in their conception and execution they reflect the creativity and industry of humankind. Liz West has seen the possibilities of such a setting. She brilliantly reminds us of our links to the mediaeval artists and crafts people who went before us. 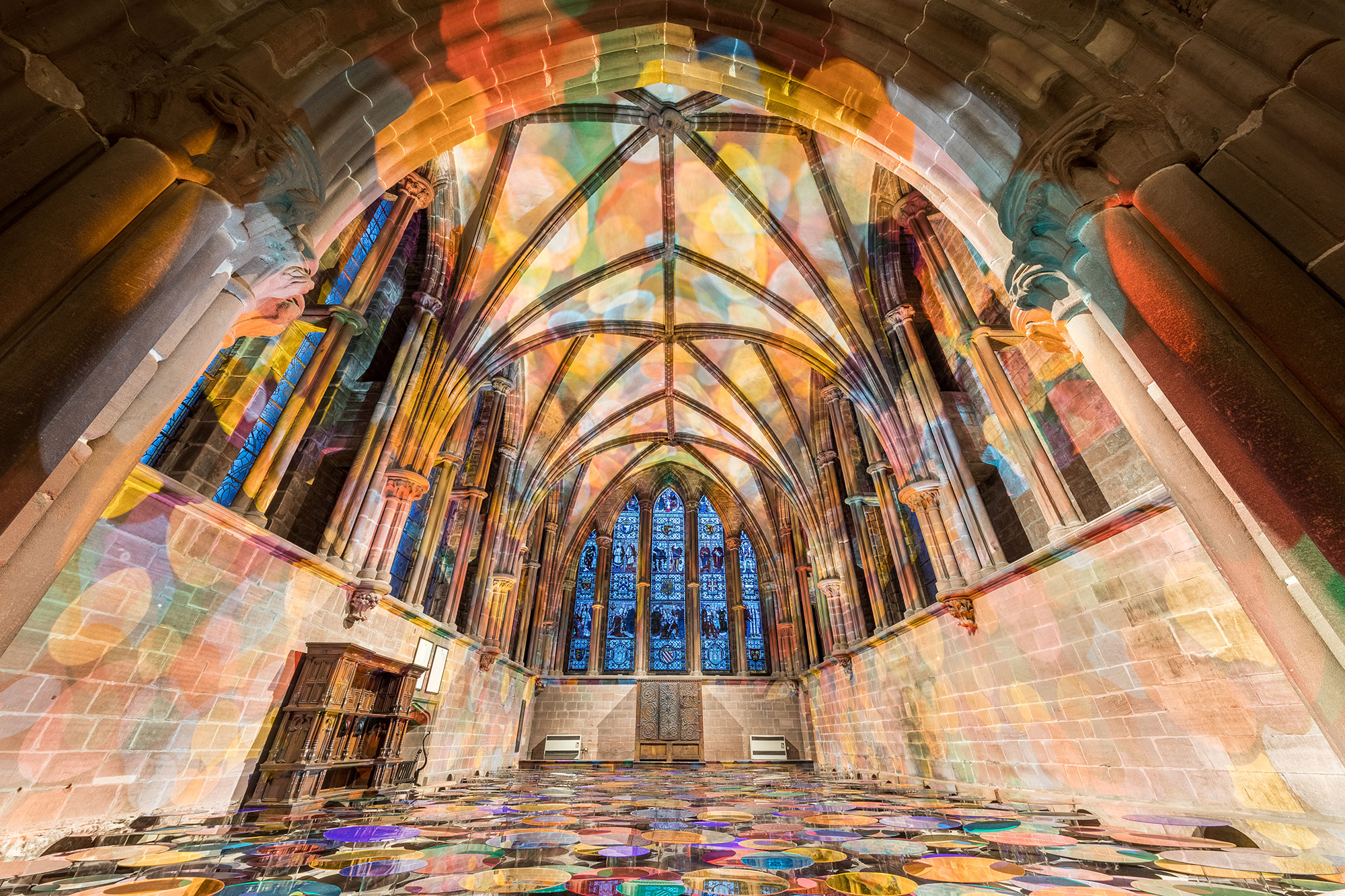 Liz has explained what inspired this piece of work:

“I looked at the colour palette in the stained glass and thought that it would be absolutely beautiful to reproduce that in the work and how wonderful it would be to have the colours laid out on the floor - as if they’d spilled from the windows.”

And indeed colour spills everywhere - spills and spreads and bounces joyously to the walls and ceiling vaults. Liz feels that this installation is particularly special for her in that it is entirely reliant upon its relationship with natural light sources. The scene changes constantly, sometimes from minute to minute. On the first day, with the weather dull and overcast, the colour reflections inside were cool and pale. On Day 2 the clear February sky led to vivid colours dappling the rejuvenated room. And so it has continued, each day and each viewing bringing fresh rewards and insights. 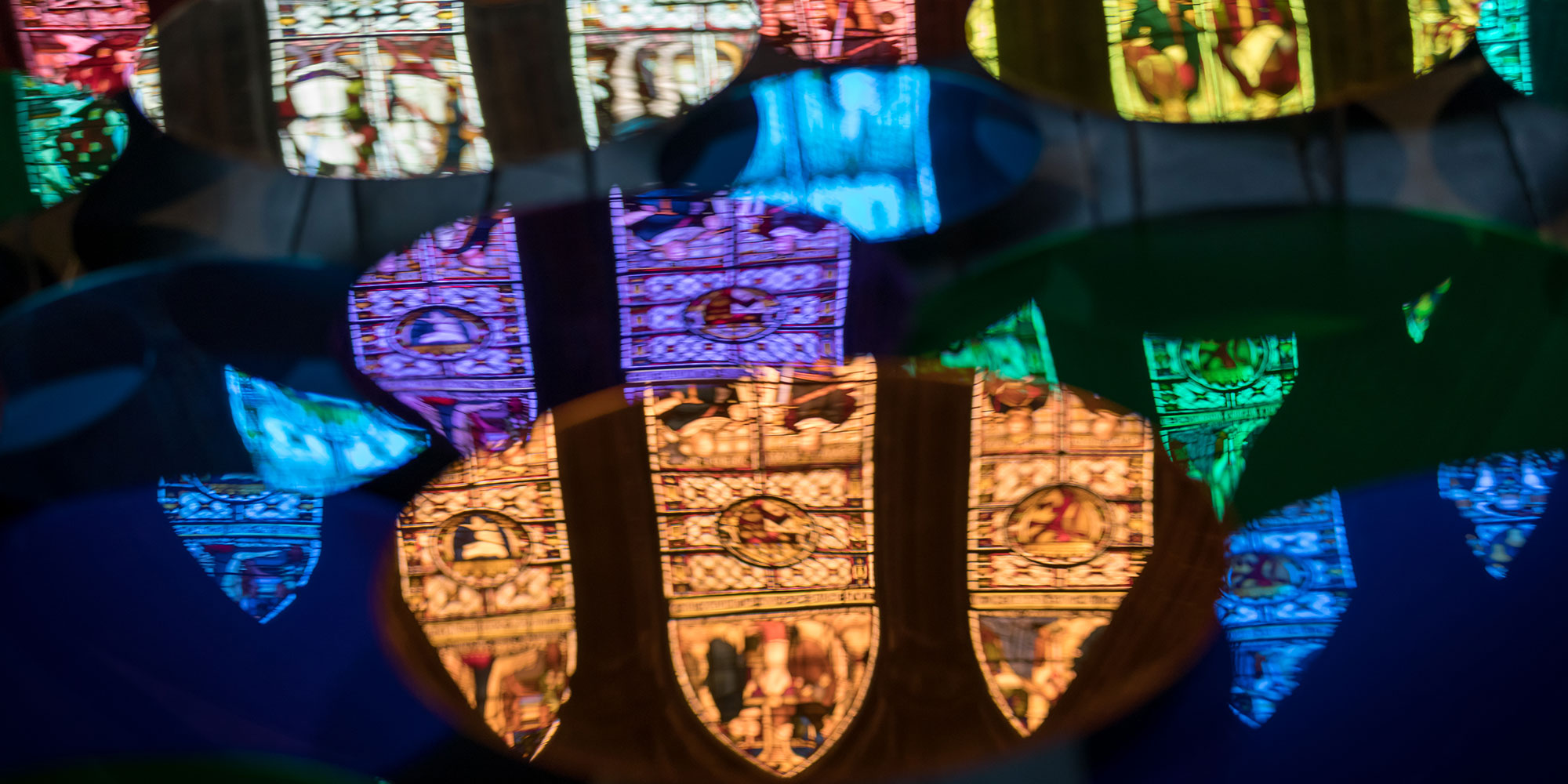 On one occasion I let myself stare for some time across the sea of colour into the middle distance, and I was reminded of Monet’s water lilies. This is one of Liz West’s strengths: she has produced original contemporary work but seems aware of its place in a great tradition. It is as if she has been inspired by history and tradition, but has not been daunted by them.

This is the latest project from Chester Visual Arts, an initiative generated by Ian and Cynthia Short who have committed themselves to bringing high quality art to the city of Chester. Long may it continue. 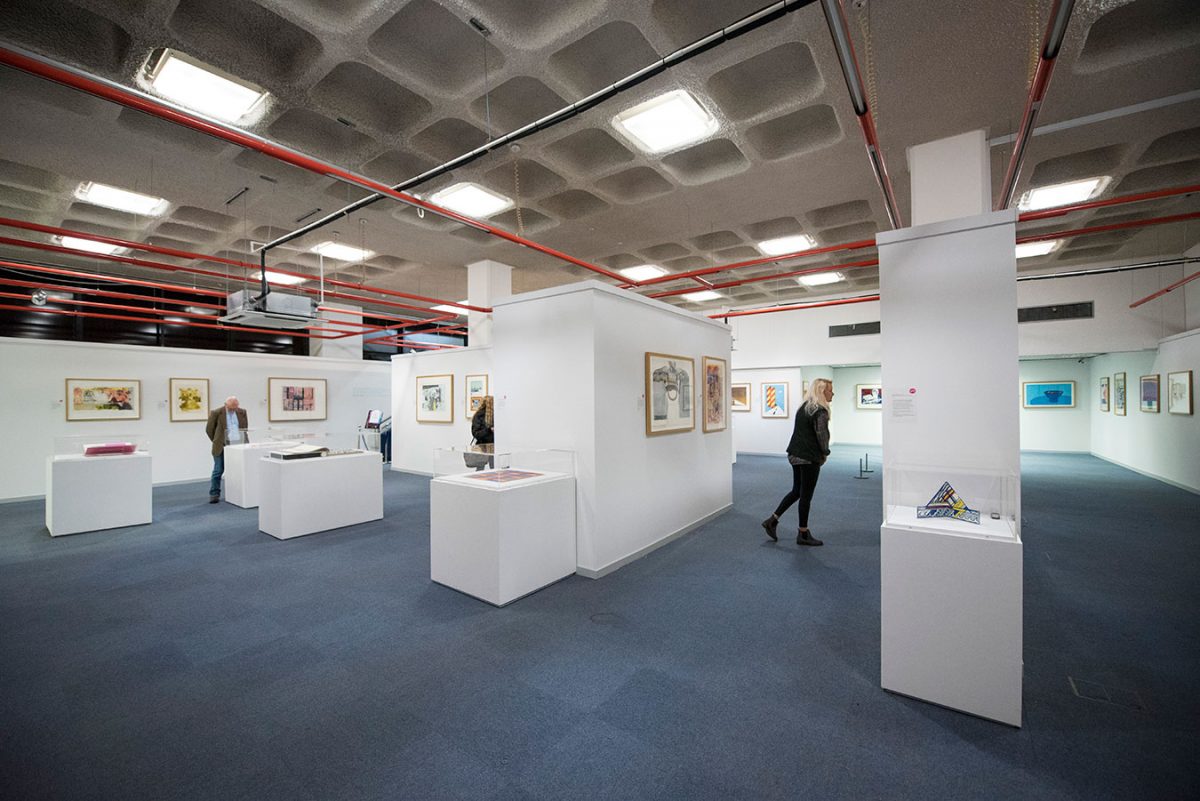 2017 has been an annus mirabilis for the arts in Chester. Theatre, cinema, music, literature, comedy, sculpture and visual art – all have been shared and celebrated in a great coming together of local people and visitors. It has been devoured by a public evidently hungry for more. It has been a summer of love.

In May, the wonderful Storyhouse opened its doors revealing a stunning new theatre, a restored cinema, and the relocated city library. Artistic director Alex Clifton has said he wanted this to be “…a hub for invigorating creativity and a unique resource for our diverse, proud community”. That vision has become a reality in spectacular fashion.

And before the end of July an exhibition of Pop Art in Print on loan from the Victoria and Albert Museum opened at the former library building on Northgate Street. Three months later, over 15,000 people had seen that show and overwhelmingly they have asked for more. 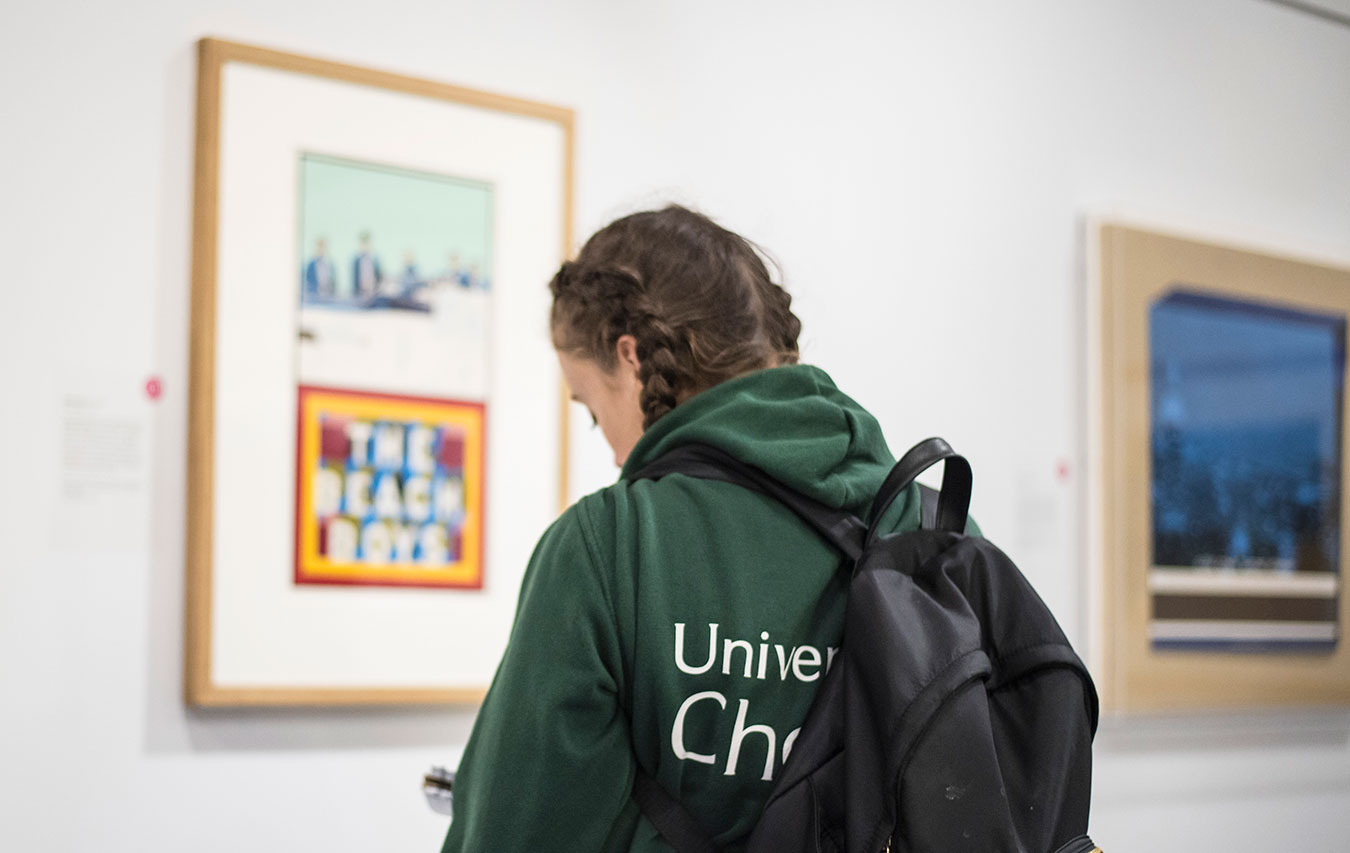 Like many people, I went to see the pop art exhibition as a curious passer-by with no specific knowledge of that type of art – other than having lived through a large portion of the period. I emerged as one of the many volunteers who have tended the exhibits and welcomed our fellow citizens. It has been a powerful and emotional experience. It’s not the art itself that’s made the difference. It’s been the people who had the vision and passion to get this organised. And then it’s been about meeting the many, many people like me who didn’t necessarily know a lot about art – but we knew we were looking for something more to enrich Chester, and here it was. 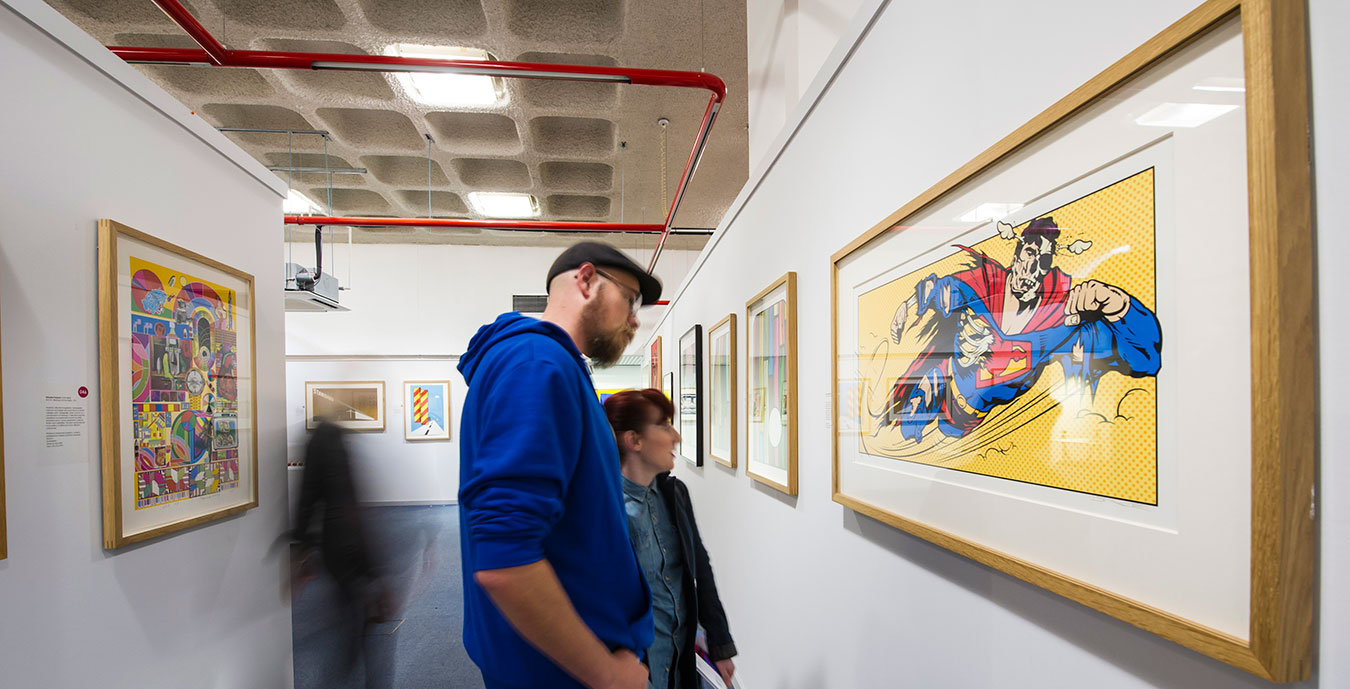 Artistic inspiration is one thing, but none of this happens without a great deal of patience, hard work and determination. Cynthia and Ian Short created Chester Visual Arts only in 2016 and have brought together a number of crucial individuals and organisations to give us something special. How else does world class art come to this small but beautiful city?

The V&A is one of the most important cultural institutions of its kind in the world – they took little persuading to entrust some of their collection to Chester. They wanted to be here. And it is to the great credit of Cheshire West & Chester Council (CWaC) that they made available the well known former library for the duration of the exhibition. Rather than lying empty awaiting it’s redevelopment, a striking building has sprung back into the artistic heart of the city.

We’ve become accustomed to hearing our politicians tell us that we can’t have first rate cultural provision (and other common goods) without a strong economy. In one sense it’s a self-evident proposition, but it can also be quite easily be inverted. And my cross-party mantra is: you can’t have a strong economy without securing the well-being of your people, including an excellent cultural offering. I suspect we’re both right, so we needn’t fall out about it.

The momentum has to be maintained. The public appetite is clearly there and Chester Visual Arts has proved that they can attract the art to satisfy our hunger. The will and the means already exists. Watch this space. 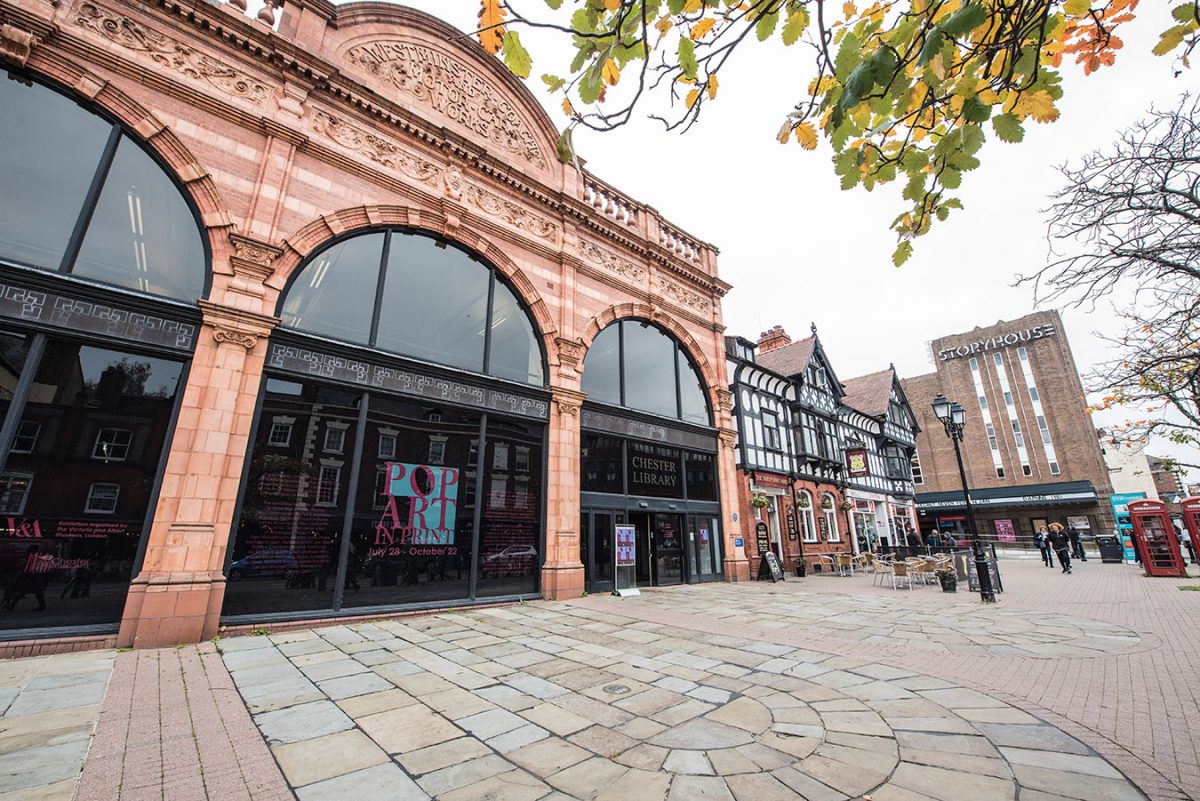 Chester Visual Art can confirm that they have negotiated with Cheshire West and Chester Council to secure the temporary occupation of the former library building. The ground floor of the listed building will be transformed into a gallery space in time to display the Victoria and Albert Museum’s “Pop Art in Print” touring exhibition. Opens 28 July – 22 October 2017.

Chester Visual Arts is a new community interest company established to address the lack of visual arts provision in the city of Chester. The board of directors has expertise from the university, business, property development, the Cathedral, Grosvenor and arts funding.
The Pop Art in Print exhibition is the first in a series of visual arts interventions into underused buildings in the city. The aim is to contribute to the renewed cultural vibrancy brought about by the opening of Storyhouse and the Cathedral’s visual arts programme.
Our immediate goal is to attract the audience for high quality visual arts and build towards the establishment of permanent exhibition space that will present ambitious work from local national and international Artists. 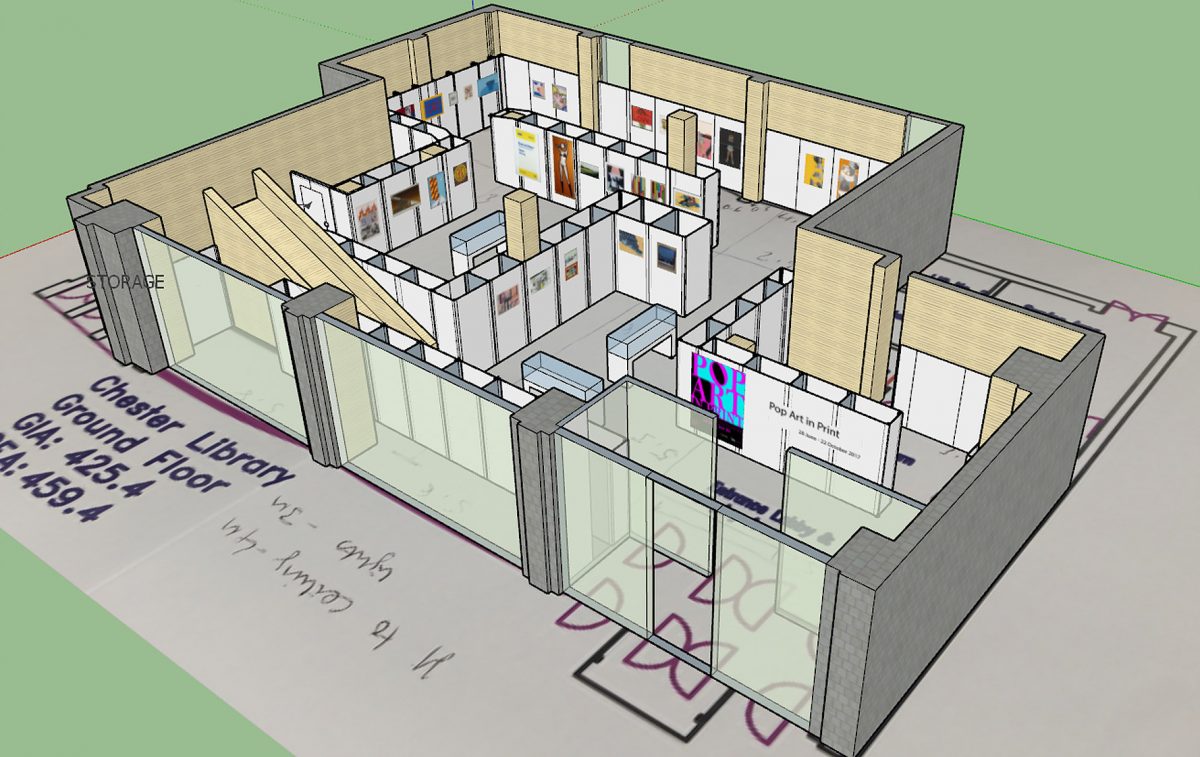 Chester Visual Arts busy designing the layout of the Gallery space to be built in the former Library building!